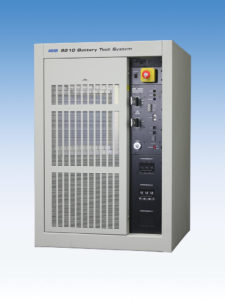 NH Research, Inc. has released the 9210 series, a single channel version of its popular multi-channel 9200 series high–power battery charge discharge test systems. The 9200 series can house up to 3 channels (power modules) in its cabinet, whereas the new single channel 9210 system is a smaller footprint allowing better optimization of laboratory and/or manufacturing space.

The 9210 further extends its 9200 family of high-power battery charge/discharge test systems, which are especially suitable for xEV electric vehicle and grid storage battery cycling as well as drive-cyclesimulations and grid-energy simulations. Like the successful 9200 systems, the new single module test battery system (9210) utilizes any of the 40V, 120V, or 600V modular, independent 12-kilowatt DC power modules which enable testing of a number of smaller batteries, each with a different test plan, power level and start/stop times. The smaller footprint makes it easier to move within a laboratory and/or manufacturing, allowing the tester to be brought to the engineer’s workspace.

The new 9210 cabinet has an internal controller, software, and connections for an external monitor and keyboard. Through this interface, the operator is able to create, run, monitor, chart and report UUT (unit under test) profiles without writing any code.

Alternatively, for complex test programs and for tests that require additional data acquisition hardware, users can employ either NH Research’s Enerchron® test sequencer software, or their own custom LabVIEW or Python application using the supplied drivers. For cost-efficiency, up to 90 percent of the energy removed from a battery is returned as usable AC power. This process, called regeneration, lowers the total utility consumption of the facility and reduces the amount of generated waste-heat. Further advantages of regeneration include a much cooler work environment, reduced air conditioning loads, and the elimination of elaborate water-cooling systems. The 9200 and 9210 series testers simulate real-world conditions with fast voltage, current and mode transition times; include a digital measurement system with high-resolution waveform capture and a digital chart recorder; provide custom waveform/profile generation; and have multiple battery-protection safety features. 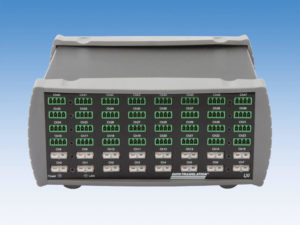 The most commonly selected DAQ instrument from NHR is the DT8874 series. This model is available in 8, 16, 24, 32, 40, or 48 versions which may include any combination of voltage, temperature and RTD channels to be specified in groups of 8.

This modular approach breaks the traditional test channel-to-DAQ dependency, allowing the measurements from any channel to be utilized by any test. Additionally, the data acquisition single device design allows it to be closer to the UUT location, which best suits the testing needs of reliable measurement with the reduction of cable lengths.